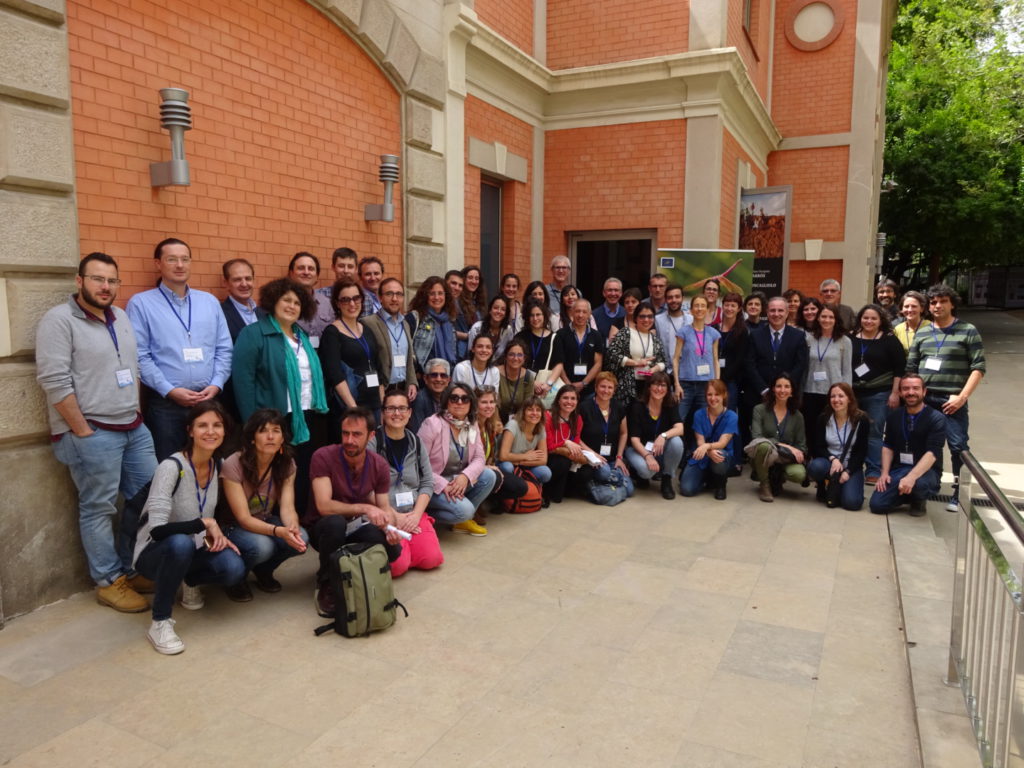 Around seventy managers, researchers and citizens gathered in Barcelona on May 3 and 4 in the final conference for LIFE+ TRivers, a project funded by the European Union (EU) that created tools to diagnose the hydrological and ecological status of temporary rivers and to improve its management according to the objectives of the EU Water Framework Directive. Among the final recommendations of the project is the need to create a new classification of temporary rivers, which have a wide variability in their water regime (from abundant flows in spring to periods in which they dry completely), which takes into account the special features to improve their management and guarantee their preservation.

LIFE Trivers is an initiative driven by a consortium formed by the FEHM Research Group (Freshwater Ecology, Hydrology and Management), from the Faculty of Biology of the University of Barcelona, the Institute of Environmental Assessment and Water Research (IDAEA-CSIC), the Catalan Water Agency (ACA) and the Júcar Hydrographic Confederation (CHX). 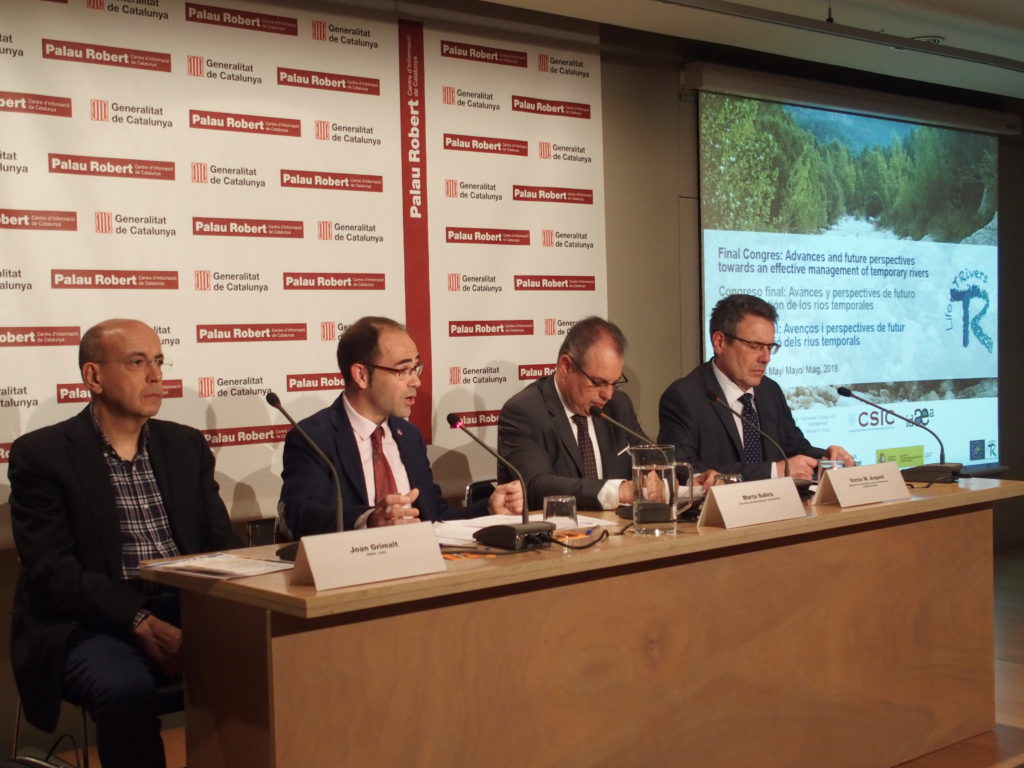 Inaugural board (from left to right): Joan Grimalt (director of IDAEA-CSIC), Albert Cirera (vici-rector for Entrepreneurship, Transfer and Innovation of the UB), Lluís Ridao (ACA manager) and Víctor M. Arqued (assistant director-general of Water Sustainable Uses and Planning at the Ministry of Agriculture and Fisheries, Food and Environment).

According to the conclusions of the first session, in which other representatives from the European Commission and water system managers from countries such as Portugal or Cyprus, and researchers from other countries –have taken part, the current classification of the ecotypes of rivers does not include the single features of temporary rivers, with a variable hydrological regime over the year and which, therefore, presents different biological communities compared to permanent rivers. “This variability means that indicators that mark the ecological status of temporary rivers are different from those in permanent rivers. Therefore, it is necessary to set ecotypes that take into account the hydrology of rivers, so that conservation requirements and indicators to assess them adapt the features of temporary rivers”, says Narcís Prat, main  researcher of the project and director of the FEHM Research Group from the Water Research Institute (IdRA) of the UB.

TREHS, a software to help managers
The first classification and management problem for temporary rivers is the lack of knowledge on their regime, since their hydrological variability makes it hard for researchers to diagnose their ecological status with common methodologies, which are proper for permanent rivers.

To solve this problem, LIFE TRivers worked on the TREHS software (Temporary Rivers Ecological and Hydrological Status), aiming to diagnose the ecological status of temporary rivers. TREHS brings the available historical data for each river flow, simulation data from water runoffs and additional information from aerial photographs and particular observations from biological samples. 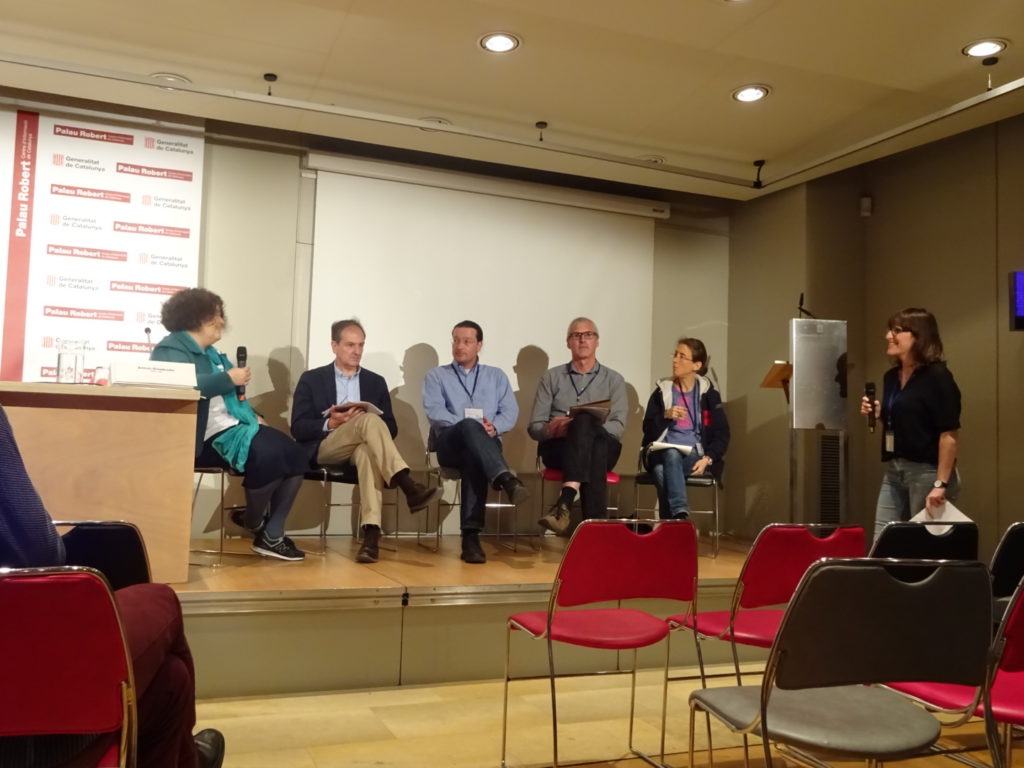 Moreover, LIFE TRivers has added the knowledge population gave on the hydrology of temporary rivers using surveys with neighbours. “It’s not only the scientist who was relevant information; neighbours can have knowledge on the regime of the river which can be useful to work on its management, filling that lack of instrumental information. This methodology empowers people”, says Francesc Gallart, IDAEA-CSIC researcher.

“The use of TREHS enabled people knowing about the real hydrological regime as well as classifying temporary masses, and with this information we can re-take sampling and assessment routines”, says Carolina Solà, from the Department of Water Quality and Control of ACA.

Detecting human impact in temporary rivers
During the conference, representatives of ACA and CHX presented the first results of the application of TREHS software in the management of rivers of their basins. Information obtained with TREHS served to set that the 40 % of rivers of internal basins in Catalonia have some seasonality, but 31 % out of those are considered temporary or short-lived. Moreover, this software enabled researchers to compare the real regime of rivers with the current regime to find out about the human impact: “Results show that about 15 % of rivers are altered due anthropic causes, due water extraction –which turns permanent rivers into temporary ones- and excessive filling, which turns temporary rivers into permanent ones”, highlights Carolina Solà.

In the rivers of the Júcar river basin district, according to Sara Jiménez, head of the Technician Services of the Office of Hydrological Planning of CHX, it is estimated that about 23 % of the rivers in this basin are temporary, and 15 % of these are temporary due anthropic causes.

Shelter for biodiversity
Once the river hydrological regime has been set, the researchers commented on the  importance of developing indicators that are adapted to temporary rivers to assess their ecological status. In this project, they compared whether the indicators of the ecological status that were used in permanent rivers can be also used in temporary rivers and they reached the conclusion that these indicators should be calibrated for temporary rivers. According to Núria Cid, FEHM researcher, temporary rivers display “a unique fauna –which is endangered many times- due the lack of protection of basins that are left during the summer, shelter for bioversity and they are important for the preservation of fish”. 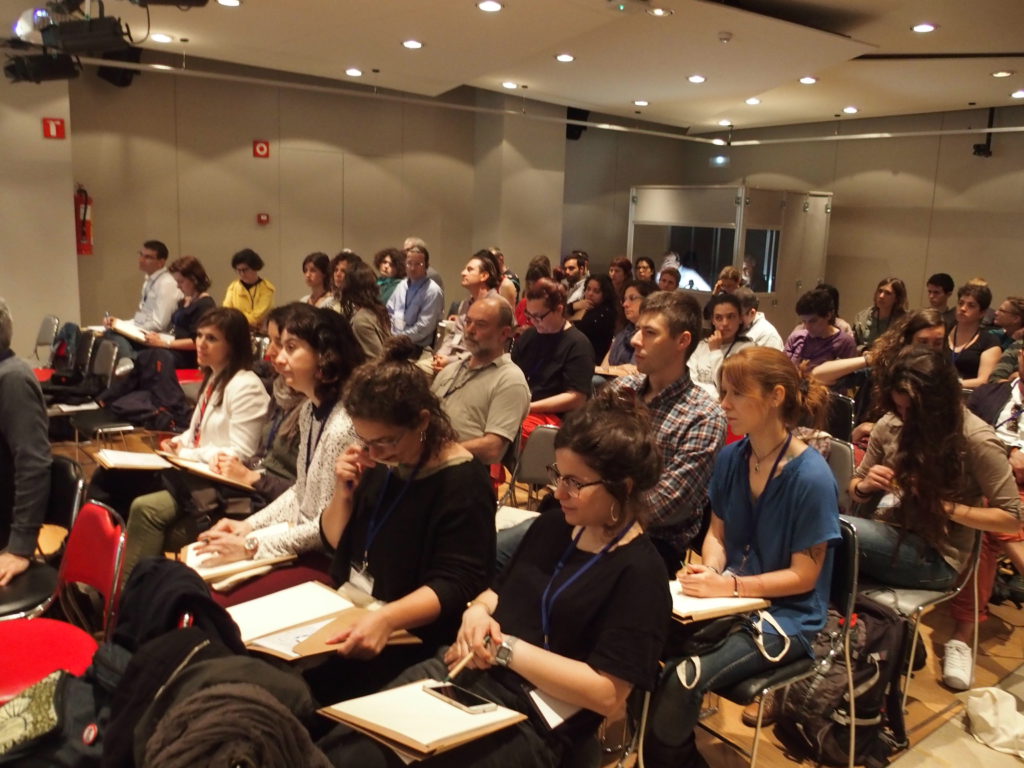 Around seventy managers, researchers and citizens gathered in Barcelona on May 3 and 4 in the final conference for LIFE+ TRivers.

Citizen participation in the assessment of rivers
Last, during this conference, they presented the social actions that were developed over the project, aiming to raise awareness among citizens and stakeholders. First, they gave details on the process of citizen participation that involved people in the diagnostic of temporary rivers and creation of proposals on management and preservation.

“This process is important because it receives knowledge from locals, it helps finding solutions, promotes the interest in the preservation of temporary rivers and it contributes to the assessment of rivers”, says Alba Ballester, expert on citizen participation processes and water management.

Another worth mentioning element was the involvement of people through RiuNeT, a citizen science app with a simplified version of TREHS. This app enables people to assess the hydrological and ecological status of rivers using their smartphones. An evaluation which is later checked by the researchers of the project. So far, more than 500 people have registered and more than 533 evaluations sent through the app have been validated.

Course on TREHS software
The conference cloed with a course on the TREHS software, which took place in the headquarters of the Catalan Water Agency. The training included study cases that were prepared for the participants and it also offered the chance to work with own data.